Why Do Dogs Tilt Their Heads: Are They Really Confused Or Acting Cute?

In fact, in certain situations, it may be a sign of a serious health problem. Read on to learn the 5 reasons why dogs tilt their heads and when it’s a cry for help!

Just look at how cute they are when they tilt their heads! Okay, so they don’t know that they look cute. But, because pawrents think that head tilting is adorable, our natural reaction is to reward them or respond with “puppy talk”.

This positive association reinforces their behaviour and it’s likely that they’ll do it whenever they want a treat or to please you.

Did you know that your dog can sense your emotions? According to a study done by Dr. Kun Guo at the University of Lincoln’s School of Psychology, dogs can read their owner’s faces and understand certain human emotions such as happiness, sadness and anger.

They say that your dog is the best listening ear you can have. Perhaps the head tilt is one of their ways of showing empathy. Afterall, this is what makes dogs one of the best companions to have 🤗

Reason #3: Dogs Tilt Their Heads To Help Them See Better

One of the more practical reasons why dogs tilt their heads is to help them see better. This was discovered by Dr. Stanley Coren and applies especially to dogs with long snouts.

To understand how it works, try this — place your fist where your nose is to simulate a long snout. You’ll notice that you’ll need to tilt your head to either side to get a better view of what’s in front of you.

Thus, head tilting may be a result of your dog trying to get a better look!

Reason #4: Dogs Tilt Their Heads To Help Them Hear Better

On top of getting a visual adjustment, head tilting may also help dogs with their hearing.

Animal behaviourist Dr. Jill Goldman hypothesised that dogs may tilt their heads to adjust the position of their ears as it helps with capturing certain sound frequencies. They may be looking out for the high-pitched “puppy talk” that pawrents use in an attempt to decipher what’s being said.

Some of us may mistake a dog’s head tilt as confusion. However, a study done by scientists at the Eotvos Lorand University of Budapest proved otherwise. According to their observation, dogs tilt their heads to listen carefully when their pawrent is explaining something.

Dog breeds that are considered to be more intelligent are more likely to tilt their heads to listen more intently.

Due to interference of ear flaps

Some dog breeds have ear flaps that cover their ears partially or completely. This may interfere with sound transmission, which requires the dog to tilt his head to hear better. Examples of such breeds include Cocker Spaniels, Basset Hounds, Bloodhounds and Poodles (Standard/Miniature/Toy).

Another example would be dogs with upright or erect ears. In such cases, it may limit the detection of sounds coming from the back. Breeds include German Shepherds, Shiba Inus, Yorkshire Terriers and Huskies.

Reason #5: Dogs Tilting Their Heads May Indicate A Medical Problem

When a dog’s head tilt is not associated with communication, this may be concerning as it’s an indication of a medical problem.

Vestibular disease is a neurological issue that’s commonly diagnosed in older dogs. It refers to a sudden interference in balance and is due to problems in the inner and middle ear.

Is It Okay To Encourage Head Tilting?

There are several reasons why dogs tilt their heads. All we know is that it’s extremely cute, so it’s natural for anyone to respond with positive reinforcement 😂

But is it really okay to encourage them to tilt their heads? Well, you’ll be glad to know that it’s generally okay! As pawrents, just keep a lookout for head tilting that isn’t associated with communication as that would be a cause for concern.

Are dogs confused when they tilt their heads?

It may seem like they’re confused but studies have found that it’s actually the opposite! Head tilting is likely a sign of your dog paying close attention to and trying to process what you’re saying.

Can you teach a dog to head tilt?

Yes, you can! Try this — vary the volume and tone of your voice when you speak to your dog. This will capture his attention and your dog may tilt his head so he can hear and understand you better.

Head Tilting In Dogs: Is It A Cause For Concern?

If there’s one takeaway from this article, it’s that head tilting that isn’t associated with communication may be an indication of a medical problem. If you notice that in your pet, do bring him to a vet right away! 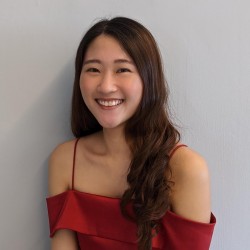 Article by:
Bernice Quek
Intrigued by celebrity and influencer gossips, Bernice is passionate about finding the latest scandals and good deals to get a bang for her buck! Her closest friends know her as someone who has an irrational love for Disney's Stitch and an unwavering loyalty to KOI.

Everything You Need To Know About Dog Muzzles