Top 13 Beautiful Types of Betta Fish Categorised by Their Tails The Betta fish is a popular pet among Singaporeans.

They are beautiful to look at and can be categorised based on their pattern, colour or tail type.

In this article, we’ll be differentiating between 13 different types of Betta fish by their tail type.

Here’s a quick video on some of the Bettas we’ll be talking about:

The Crowntail Betta has a tail and fins with spike-like characteristics. This is due to the reduced webbing between the rays of the fins.

Much like the Crowntail Betta, the Combtail also has rays at its fins. However, the size of its webbing is noticeably larger, reaching up to ⅔ of the way up its tail.

Can only be produced by selective breeding

Also known as the short-finned Betta, the Plakat is a fish with large strong bodies, powerful jaws and a short tail.

This species is rumoured to be the ancestor of all other Betta fishes.

The Veiltail is a common type of Betta that is widely available. You can tell this species apart from the others by its long and drooping tail.

The name of this species comes from its caudal fin which fans out at a 180° angle. As the shape resembles a semi-circle, this fish was named the Halfmoon.

Unlike the Half Moon, the tail of an Over-Half Moon Betta can spread and reach over 180° around its body.

The Rosetail Betta is a beautiful variation of the Halfmoon. The main difference between the two is that the Rosetail has ruffled edges that resemble the petals of a rose.

Quite aggressive
Not recommended for new owners

The Feather Tail Betta is very similar to the Rosetail. However, the Feather Tail has more excessive branching of its fin rays, giving it an even more ruffled appearance.

The Delta Betta has a tail that starts out narrow towards the body and widens towards the tip, forming a triangular shape. The shape of its tail resembles the Greek alphabet, delta (Δ).

Possibility of aggression varies for each individual fish

The Double Tail Betta is a type of fish that has two distinct tails. Due to a genetic mutation, its caudal fins are separated at the base and grow in two lobes rather than one.

This species is rare as its babies tend to have a low survival rate.

The Half Sun Betta seems to be a combination of the Half Moon and Crowntail/Combtail Bettas.

This fish has a large tail that spreads 180° wide like a Half Moon. It also features slight crowning between the fin rays and has webbing like the Crowntail and Combtail species.

The Round Tail Betta is a fish that has a fully rounded tail with no straight edges. This species is said to be extremely rare.

Comes in many patterns and colours

Others types of Betta fish (Bonus!)

As its name suggests, the Giant Betta is a supersized variation of a standard Betta. This fish is differentiated not by its tail, but it’s mammoth size.

Their size is a result of extensive selective breeding.

Possibility of aggression varies for each individual fish

This species of Betta has extra-large pectoral fins which resemble elephant ears. Hence, it is also referred to as the Elephant Ear Betta.

Quite aggressive
Can be found as any tail type

Raising a Betta Fish in Singapore

There are a wide range of beautiful and majestic looking Betta for fish lovers to choose as pets.

However, before you decide to rear one, it’s best you read our basic guide on buying and caring for a Betta fish in Singapore.

You can also find out more by reading our article on the FAQs about them. 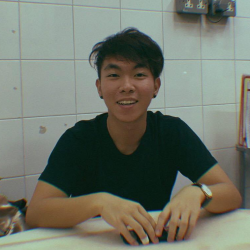 Playing video games and taking naps are two of Kuanyung's favourite activities. He is also passionate about space exploration and philosophy. When he was a kid, he had dreams of becoming an astronaut.

Why Is My Fish Tank Cloudy – Causes, Colors and How To Fix It

9 Best Dog Harnesses in Singapore for Pups of All Sizes

My Cat is Pooping Outside His Litter Box: Causes, Solutions and Expert Tips